This June, our member Caitlin Heffernan will be heading to the International Swiss Open SN/VI Judo Tournament in Uster, Switzerland. 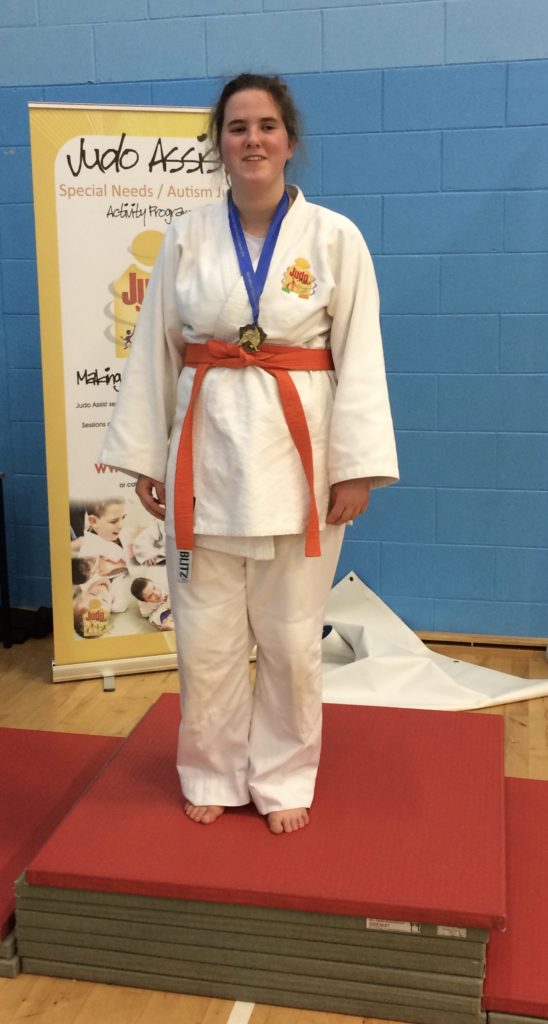 Here is a brief story of how this has come about.

Caitlin became a member of the Mid-Western Association for Spina bifida and hydrocephalus from her birth in 2002 when she was diagnosed with congenital hydrocephalus. Caitlin’s visual impairment is a direct result of the damage caused by the hydrocephalus.

In 2015, Caitlin joined the NCBI when she discovered she was entitled to the Visiting Teacher service. This in turn led her to discovering Camp Abilities and subsequently Vision Sports Ireland.

Caitlin first attended Camp Abilities in 2017 and thoroughly enjoyed trying all the sports and activities, and equally important, she really appreciated getting to spend time with others who were visually impaired. In her words, she “felt normal”. Once home, Caitlin wanted to pursue her new found love for Judo and The Black Eagle Judo Club based in Ardcroney, was a perfect match. They have Judo Assist classes too, and so, the Coaches are all trained in, and aware of, the ‘extra bit of help’ some people need.

Two years on and Caitlin returned to Camp Abilities as a Leader In Training and still attends the The Black Eagle Club training with the Adult mainstream class. During those two years Caitlin has twice taken part in the International Friendship Games. These games are open to Judo Assist and Mainstream Judoka of any age, any ability and from any Country. Caitlin is also a member of the National Inclusion Team and hopes to be able to compete with them in the future.

In January of 2018 & 2019 Caitlin competed in the All Ireland Judo Championships winning the following medals.

It is due to Caitlin’s success in this years All Ireland Championships that she now has the opportunity to attend the International Swiss Open SN/VI Tournament. Caitlin will be the only one competing from Ireland.